Posted at 11:14h in blog by Flying Legend 0 Comments
0 Likes

My return to flying was outlined in the first blog, but some background might help the reader. When flying in GA most of my training was undertaken in the Cherokee Warrior, and Archer followed with time in the Cessna 150 AeroBat, Grumman Tiger and Decathlon accruing total hours of about 130 when I stopped.

On my return, I started in the Jabiru and currently flying a Foxbat with about 30 hours since starting the project. The building was not my first choice but the Tucano did grab my attention, and the intent is to begin flying next year in my Tucano.

Note: So why do the Europeans use kph?  – no one could give an answer other than it makes them feel like they are going faster

One reason to visit Flying Legend factory in Caltagirone was to test fly the current factory demonstrator aircraft and to be checked out in the Tucano R.

The first impression as you approach the aircraft for the first time is its size, this is a large aircraft physically for an ultralight and could best be described as a retractable RV8 with a Rotax 912. 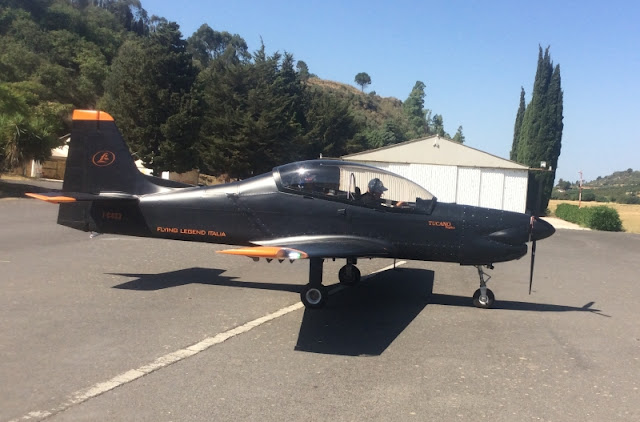 Entry to the cockpit is made easier using the fuselage step, and once in the back seat, it proved to be roomy for this real size pilot. Fully ensconced, Chico aka “The Commander” Flying Legends ex-airforce pilot took me through the operation of the instruments and systems fitted to the rear seat of this Tucano.

With both of us buckled in and a final briefing it was time to go flying.

It was summer day of 40 degrees C with an MTOW of about 690 kg and this aircraft was fitted with a Rotax 914 that is scheduled to be removed and replaced with a supercharged engine package and will be the test bed for Flyings Legends 912 upgrade kits.

Time to tackle the “Carrier”, the company nickname for its airfield located in the base of a tight valley with hills on both sides. It was a real change from Rylstone with its clear flat paddocks all around the strips. After a couple of circuits, Chico requested a full stop, once back on the tarmac and shutdown Chico requested we swap seats – I was now in the front.

Back in the air again and my initial impression is of sable platform riding through the air, not on it as the ultralights that currently I currently fly, aerlions felt firm but not heavy, elevators lighter with the rudder heavier.

A typical circuit consisted of reducing speed to 140 kph, gear down, prop fine, flap to 15 degrees and let the speed bleed back to 130 kph with 120 kph the minimum while manoeuvring to the field. Fly over the ridge, sweep down into the valley to sight the runway, reduce speed to 110 kph on short final, three green/full fine and sweep over the cane field at the threshold that hides a power line. All good, bleed back to 90 kph, flare and hold the nose while flying parallel to the runway and the Tucano will settle down smoothly, full stop and taxi again for a brief and prepare for another flight later.

Next flight, Chico requested we establish level flight 2400 feet for a few basic stalls – power off for a clean stall with no drama, again with full flap. The impression was that in both cases was that the nose was very high with only blue sky visible in the front of the bubble canopy with a clean but positive break requiring only a release of back pressure to resume normal flight with little or no rudder needed.

Steep turns of 50 degrees were just a matter of just inputting the required bank and adding power to maintain the nose attitude in a turn. Chico performed some basic aerobatics which was pure joy, again in the wing-over and roll, the aircraft maintained that on-rails feel.

Back to the field for more touch and go’s and finally to a welcome full stop and like all things Italian, terminated with an Expresso.

Next day Chico and I left the factory field and flew for 15 minutes up the coast to a local airfield that was flat and at sea level. We flew up the coast between 1000 / 500 feet with the aircraft holding altitude smoothly and with little pilot input.

Here a final set of accelerated stalls were undertaken by slowing the aircraft to within 20 kph of the stall and applying a sharp pull on the stick establishing an exaggerated pitch attitude with gear and flap down.

No change but the aircraft does now require more use of the rudder to keep the wings level with the largest difference being at full flap where the Tucano was noticeably more unstable going into the stall, requiring a more positive approach on the rudder to keep the wings level. All stalls produced a high nose attitude with a complete loss of the horizon at the point of stall, and there is no way I could mistake this for safe flight.

No apparent buffeting or stick feedback noted by myself, but the aircraft was clearly stalling by its nose attitude and sluggish response of the controls. At no time did the pilot detect a desire for the Tucano to drop a wing and long as the ball was centred, to recover, release back pressure.

Finally, an engine out landing was started from 2500 ft requiring a 180-degree turn to regain a visual on the runway keys, establish a glide, while through the whole approach the Tucano was predictable in descent allowing the pilot to finish with a curved path to pick up the runway centerline. With the nose on the keys, the landing gear/flaps extended for a textbook landing and more Espresso.

Later we returned for a full stop at the Carrier and more Espresso.

The rest was just about a low time pilot trying hard and getting a lot of small things wrong with the biggest issue being the Tucanos ability to bleed and gain speed easily, unlike the more basic aircraft that I currently fly.

My best memory is just flying behind that long nose terminating at the big spinner in a clear plastic bubble with the Mediterranean all around you, beautiful surroundings in an aircraft that just oozes pure military feel.

Stable and smooth are the two words that could describe the Tucano in all flight modes with landings that feel like you are in a much larger aircraft producing no noticeable float.

Can a low time pilot with only access to a Foxbat fly a Tucano? – Yes with more training, a careful approach and begin aware of their personal limits.

Maria my wife and Chico – first flight in 30 years

Sorry, the comment form is closed at this time.